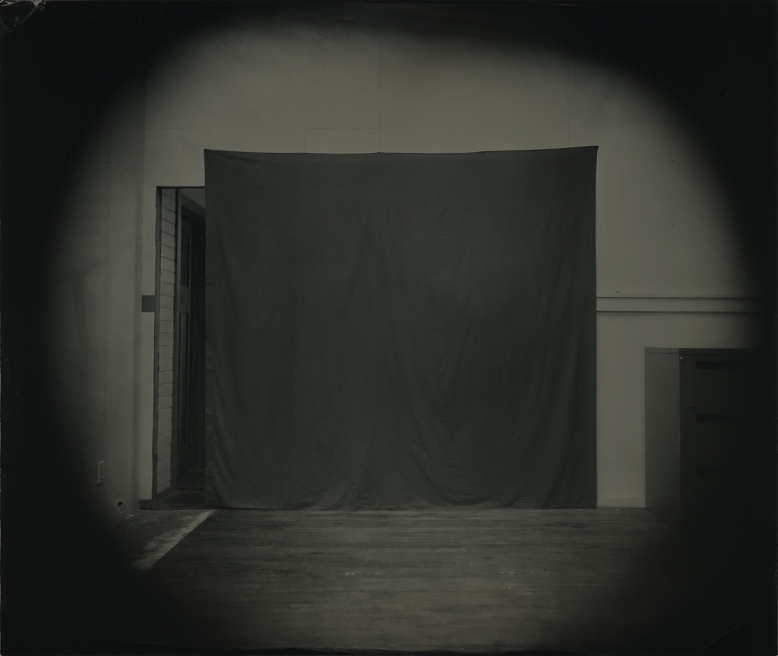 Bad angle describes the lines of vision of people sitting at certain positions in the audience, which enable a magician’s secret to be exposed.  Magician’s Dictionary

In considering a premise for an exhibition of emerging photo media artists, I was compelled to take a step back, and look at the foundations of the medium. Photography as a form of magic. A space in which to ‘try on’ beliefs, personas or scenarios. Somewhere to experiment with or confuse reality. Photomedia is a science, a mechanical process that tries to represent the world as we see it. However, it is the failure of the method which has secured its place in history and in our hearts: the variables of process and time introduce mistakes, aberrations, tricks and allusions to forces beyond the frame.

Bad Angle is a double-edged title. A term taken from the Magician’s Dictionary, it refers to the viewpoint of some audience members whereby a Magician’s trick is laid bare and the illusion shattered. The phrase is also common to photography, relating to a criticism of a photographer’s chosen standpoint, or the unflattering light in which a subject has been captured. This exhibition therefore borrows from the flexibility of the phrase, including work that is as much about the construction of a visual vocabulary, as it is about its criticism and dismantling.

These artists have been chosen as their work relates to the idea of photography as a moment for the suspension of belief. In these works, the viewer continually calls into doubt the reality of what they are seeing. Occasionally self-conscious and often using simple means, some of the exhibits explore the very act of looking (conceptually as opposed to voyeuristically), breaking up the perpetual crowd into kaleidoscopic fractals in the case of Parachutes for Ladies, mirroring the scene hidden behind the all powerful lens in Rachel Scott’s video installation, or the sensation of afterimage in Sean Rafferty’s piece. Other works explore ideas borne alongside the alchemical beginnings of photography – the seemingly miraculous ability of the camera to capture reality, and create theatre, using time and light.

Ben Cauchi is an artist whose work is influenced most explicitly by the wonder associated with the origins of photography. Adopting a traditional wet-collodion on acrylic technique, the atmospheric scenarios he constructs, doctors and documents in his studio allude to Victorian aura and ghost photography. They are disembodied scenes, empty but loaded: a lonely tarpaulin implies a stage, a broken glass implies an incident. The process by which the works have been made ties them mysteriously to another era, and so they remain poised somewhere between then, now and a future into which perhaps the artist or the objects once documented, have escaped.

Garry Trinh diligently observes his surroundings, methodically collating imagery that when viewed en masse, takes on a powerful dimension. His Light Rays series depicts reflections cast by glass buildings onto corresponding surfaces around the city. These transient moments between impenetrable facades only happen at certain times of the day, in particular seasons, and would largely disappear unnoticed. By capturing the strangeness of their shapes and their occasional majesty, they take on ghostly associations, and light becomes the subject as well as the object.

There are of course many conflicting opinions on the subject of Magic. It has been viewed with contempt, disbelief, with awe and fear. Some have distilled the concept of magic as subjecting of the will of man onto natural phenomena, a process in which ‘likenesses’ are created and altered to effect changes in the external world.[1] The parallels with artists and their role in creating meaning or elevated sensory spaces, is of interest in this exhibition, as is the notion of doubling. Artists are catalysts for new avenues of thought, and instigate the transformation of materials to enable new perspectives. They create replicas of our experiences, in order to expose the discrepancies.

The figure of the artist as Shaman, for instance, is particularly resonant for Clare Milledge who stages apparently ritualistic performances using objects and costumes that she constructs herself. Her work is on the one hand genuine; she has researched the relationships between human-animal hybrids and Shamanism, Siberian witch doctors and the patterns created within the eye during hallucination (entoptic phenomena). She breaks the sound barrier with whip cracking, fills the air with flour and pigment and enters a state of ‘ecstasy’ during her performance, alluding to the practices of animism in her Kangaroo headdress. But, her work is also cynical, agnostic perhaps. This ‘dualism’ creates a deliberate ambivalence in the work, we simply don’t know whether she’s for real. Imitating a hybrid of these belief systems, the possibility of transformation or heightened states is at once suggested and derided. Her titles are playful, Dick Tickle Dada, Immortal Techniques of Ecstasy, and the energy of her performance and the attendant objects are left in limbo, a wishful but skeptical shrine to spiritual awakening.

Heath Franco is also drawn to alternative realities. He is the main protagonist in most of his video installations, creating the films alone and playing a plethora of alter egos. He describes his practice as being ‘immersed in post-millennial visual technologies in which narrative, identity and aesthetic are transgressed and reconfigured’. Certainly the mesmeric chants that dominate the characters in his videos are like entering a YouTube spiral on acid. Franco’s new work, Your Door, explores the darker corners of his, and our consciousnesses. The personas he creates and superimposes onto familiar surroundings; a suburban front door, a leopard print mug, are menacing and funny. They defy narrative, scale and perhaps even description, their looping repetition making the most benign statement deeply sinister.

Many of the artists utilise the camera as a device to reflect and document elements of performance, of the artist, or scenarios constructed by them. Jamie North is a Sydney-based artist who plays with the symbolism and history of botany in much of his work. He stages poetic mise en scène that incorporate native species growing from and within symbols of urban dominance, subtly critiquing our invasive coexistence with Australian ecology. In this exhibition he shows two ‘strata’ works, mirroring the geological cross-sections that expose the accumulation of matter over time. The study of stratum provides detailed information on the geology and history of a place. North has staged metaphoric studies of the habitats of Magenta Lilly Pilly and Illawarra Plum, fantastical archaeological surveys in which the strata are made up of broken garden ornaments, victims of an apparent inferno. The upper layers have become populated with a verdant network of roots and new growth. The species (in full fruit) represent the reassertion of shrubs that would conventionally make up the under-storey of Australian rainforests, a beleaguered memory in urban New South Wales where, North has noted, lone fig trees nestled between suburban houses on the crests of hills are the only hint of the complex biota of the past.

Another form of residue is explored in Sean Rafferty’s installations. Harnessing the unstable properties inherent to cardboard, he mirrors the photographic process, using paint, obscuring and revealing areas of the material to the sun. The faded image is taken from a film or photograph, and when this projection ceases, the scene appears to remain, like a mirage or retina burn, perfectly aligned with the scene before. Violent Light shows the Blacktown Drive-in at intervals during the day, as night falls a film jerks into motion on the screen; spliced film remnants gathered during Rafferty’s role as a projectionist flicker onto the screen. The scene disappears as a timer extinguishes the projector bulb, and we are left with a memory of the scene, a faded replica. Rafferty explores the projection surface physically, symbolically and physiologically. A space onto which we project our associations and desires, he shows it to be a metaphysical entity by combining scientific and cognitive processes.

Parachutes for Ladies are the collaborations of Jessica Olivieri and Hayley Forward (the ladies). Working with members of the public and untrained performers (the Parachutes) they stage interventions that combine visual art, dance, sound and performance, often drawing on ideas surrounding social psychology and the human condition. A key interest in the body of works on display is the tension between the individual and the group, or crowd. Citing a particular 1964 case in which a woman was murdered despite 38 witnesses, the artists explore and counter ‘the bystander effect’, whereby instead of ‘empowerment for resistance and riot, [the crowd invites] the possibility of passivity and disempowerment’.[2] Taking a variety of forms, the collaborators staged momentary performances, the photographic documentation of which is on display. Uncanny and fleeting, their presence is largely ignored, but the bodies interact in unison, and in formation, against the grain of the crowd. A staged aerial perspective distils their logic. In a photographic nod to the films and choreography of Busby Berkeley, a perfect circle of red-lipped bodies, no longer expressive individuals, are rendered as pure synchronised form. One of the witnesses defended his inaction at the sight of a woman being violated in 1964 as he had “thought a movie was being made” and it is the ease with which fiction displaces fact, and ‘they’ replaces ‘me’, that these works consider.

Half Square/Half Crazy (after DG) is an understated video by Rachel Scott. The camera is a passive but participatory eye, positioned on the floor, it watches the artist rolling a series of performance mirrors in front of the camera. The mirrors also take part, bouncing the light back into the camera, revealing and fragmenting the scene behind us, and occasionally concealing the artist with their impenetrable gaze. Despite a sense of industry to the piece (as if we may be watching back-stage prepare for a production) as the exchange of one mirror for another continues, the cyclical motion becomes almost intimate, an unexpected dance, or a perpetual arrangement. The camera is again left to observe a subtle illusion in Scott’s second video, trained on an architectural beam, there is a sense of motion as the light shifts on the structure in the frame. It is like we have found ourselves high up in a huge engine, moving while standing still.

The videos and photographs in this exhibition are about this process of looking, a practice dominated largely by not seeing. The camera provides us with constant and conflicting information, building and skewing our understanding of the world. We rarely look closely, or critically, and we don’t often allow ourselves to imagine, or to picture the ‘other side’. But it is also a little bit magic, as are we, and it pays to remember that now and then.