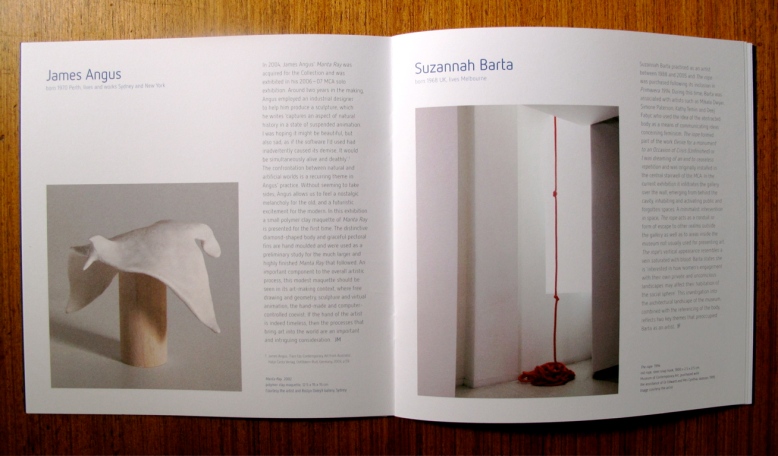 Primavera is an exhibition series established in 1992 to showcase current strands in emerging art practice by featuring Australian artists aged thirty-five years and under. Aside from the Biennale of Sydney which began in 1973, it is the longest standing annual exhibition series in Australia. Primavera was initiated by Dr Edward and Mrs Cynthia Jackson together with their family, in memory of their daughter and sister Belinda, a dynamic jeweller who died at the age of twenty-nine in 1990. Belinda’s favourite season was spring and Primavera’s occurrence at this time each year associates the exhibition with new growth and potential. This generous endowment to the Museum’s annual program was a unique and vital component of the MCA’s calendar. Seventeen years on, this exhibition continues the institution’s commitment to collecting and exhibiting work by living contemporary Australian artists.

The development of the MCA’s collection began in 1967 through the University of Sydney’s JW Power Bequest, which preceded the opening of the Museum in 1991. The decision to acquire the work of Primavera artists began in 1993, the first purchase being a suite of works by Gail Hastings, an artist included in the inaugural Primavera exhibition. During the mid 1990s over thirty works by Primavera artists were acquired by the MCA in an attempt to preserve the creativity and experiences presented within the exhibition series, and to support young Australian artists. Collecting diminished between 1998 and 2003 as the Museum faced financial instability; however, a revised acquisitions strategy was reinstituted in 2003 that included a specific focus on collecting the work of Primavera artists. To make a work of timeless art showcases a selection of MCA acquisitions by Primavera artists.

The MCA appoints a new curator annually for Primavera and twelve of the seventeen curators have been invited from outside of the institution. In their selection of Primavera artists, these curators essentially determine the pool from which acquisitions can then be made; as a consequence the Primavera collection is exceptionally diverse. To make a work of timeless art has been selected from this wide-ranging collection, and intends to generate some important dialogues. The exhibition also provides a historical framework for the presentation of works rarely, if ever exhibited since their acquisition.

‘The idea of process has penetrated our system of certainties.’[1]

Everyone wants to be close to ‘the wheel of history’, to be remembered, to occupy a place within the wider schema of recent art history; and yet, it is only with the benefit of hindsight that the relative importance of an artist’s work can be determined. The exhibition aims to reflect this tendency by taking its title from one of Gail Hastings’ ‘sculptural situations’ being exhibited here for the first time.[2] To make a work of timeless art reflects the idea of ‘timelessness’ as a theoretical proposition or process, as opposed to a completed achievement. The adoption of this title from a work in the exhibition itself not only reflects the sentiment of artistic and curatorial practices across time, but leaves space for the possibility of failure or revision, drawing on a thread within the exhibition relating to artistic process.

The inclusion of ‘preliminary’ pieces in the exhibition highlights the often unseen aspects of studio practice: James Angus’ maquette of Manta Ray (2002) which was used to determine the final design of his large-scale sculpture is presented here, as is Andrew McQualter’s untitled (study) (2006–07) a watercolour ‘guide’ for his large-scale wall-painting, recently installed in the MCA’s New Acquisitions 2007. Conversely Kerrie Poliness’ Red Matter Wall Drawing is recreated once again on the walls of the MCA from the instruction book purchased in 1995. The inclusion of these works highlights one of the strengths of the MCA collection—its support of ephemeral or instruction-based works of art.

The exhibition also provides the opportunity for the artists to ‘revisit’ their works in the Collection both physically and philosophically. A number of installation-based works have been reconfigured especially for this exhibition and we are honoured to include early examples of practitioners in this field, such as Mikala Dwyer, David Rosetzky and Lyndal Walker highlighting the strength of this continued trajectory in Australian art practice. In some cases the artists have loaned additional components that contextualise and extend their work in the Collection: recreating elements of their initial Primavera display, or allowing us to trace their path since their works were first shown. For example, Marco Fusinato’s 0_SYNAESTHESIA EDITIONS series (2005) has been loaned to the exhibition to display his continued investigation of experimental sound, evident in the works held in the MCA’s Contemporary Art Archive from his ‘anti-technique’ band projects, Scala and Solver.

Stylistic shifts within Australian art practice between 1991 and 2008 are also evident in the exhibition. The five year ‘gap’ in the Collection, representing the period during the late 1990s when acquisitions ceased, highlights a noticeable schism. From 2003 onwards, the need to expand holdings in ways that represent current practices, for example the increase in time-based works, is apparent. The growing prominence of video art in Australia is represented in part by Shaun Gladwell’s Tangara (2003), and from an earlier period, David Rosetzky’s first video Foreplay (1995) is also on show. It is also interesting to note that Designs Associated with the Site of Yunala (2008) by Yukultji Napangati, an artist included in Primavera 2005, was purchased this year. Napangati’s painting is only the second work to be acquired by an Indigenous Primavera artist, and indicates the MCA’s continued commitment to collecting work by young Indigenous Australians.

The existence of artistic communities or collective links between artists in the earlier stages of Primavera’s history have emerged once again. A number of artists in the Primavera collection were involved in Melbourne’s artist-run initiative, Store 5, which was active between 1985 and 1993, and were associated with a rigorous exploration of principles surrounding minimalism and geometric abstraction.[3] Works by a number of Store 5 artists are included in this exhibition, allowing us to see some of the ways in which Australian practitioners have corresponded with international artistic agendas. Another such grouping—although professional and social, as opposed to stylistic—exists between artists Andrew McQualter, David Rosetzky and Lyndal Walker who helped establish 1st Floor Artists and Writers Space (1994–2002). We also found four Primavera artists represented by experimental sound works on a limited edition vinyl record, produced by Sarah Cottier Gallery in 1998 which will be audible within the exhibition space. Poliness, normally associated with abstract wall-drawings, can be heard typing ‘Love Letter’ while Dwyer has submitted a song old man from her 1995 ‘Sad Songs’ exhibition.

A certain amount of risk is involved in the acquisition of artworks for any contemporary collection, especially those that have as their focus the practices of young and emerging artists. To make a work of timeless art illustrates the importance of the Primavera collection. While some of the conceptual concerns are located in a particular era, it is important to note the continued practice of almost all of the artists in this collection and to acknowledge the ability of art and ideas to remain contemporary, extending beyond the sum of their parts. Professor Virginia Spate, in commenting on the development of a ‘Museum’ of Contemporary Art and its growing Collection in 1980 said, ‘It is almost a contradiction in terms collecting something that’s constantly changing and putting it in a museum like a fossil’[4]. The impulses of previous generations of artists rarely confer the same messages to new audiences, and the curatorial rationale to acquire particular artists’ work do not always accord with subsequent collecting policies or interests. Despite best intentions, the decision to acquire a work for a collection is inevitably personal and subjective; ‘a curator can never know what aspects of one’s work or results of judgement will prove to be of enduring value or be endorsed by others in the future.’[5]

What is clear is that there can be no definitive or linear history of Australian emerging art practices through an initiative such as Primavera, or the collecting thereof. Vital and exciting as this annual exhibition is, each curator brings a new and subjective reading of emerging Australian art practice to every exhibition. The richness of the Collection reflects the successes and the failures of the artists, the curators and the institution. As with any collection exhibition, the ‘story’ presented is, and can only ever be, a relative rather than absolute truth. The discrepancies, subjectivities, constructed histories and missing pieces within any institutional collection should be interrogated, revised, celebrated and most importantly, brought into the light.

[2] We are most grateful to Gail Hastings for her generosity in allowing us to adopt To make a work of timeless art as the exhibition title from a sculptural situation held in the MCA collection, also on display in this exhibition.

[3] Stephen Bram, Vicente Butron, ADS Donaldson, Marco Fusinato, Kerrie Poliness, Anne-Marie May, Gail Hastings and Constanze Zikos are represented in the Collection and were all active within the Store 5 artist-run space, along with Sue Cramer who was a curator at the MCA from 1990­–2001. For further reading see Store 5 is…, edited by Deborah Hennessy, published by Anna Schwarz Gallery, ex.cat. 2005 and Pitch your own tent, edited by Max Delany, Monash University Museum of Art, Melbourne, 2005.